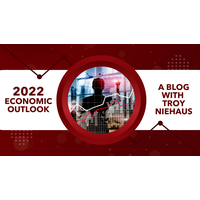 The exchange of knowledge and personal experience is the key to successfully investing and creating long-term investment strategies. At Keiretsu Forum Northwest & Rockies, we realize this and regularly offer training courses, seminars, and workshops with content that is of great value to investors and entrepreneurs alike. To keep up with the ongoing changes, we have started a monthly lunch and learn session on the first Friday of every month. In March 2022, we were honored to welcome back Troy Niehaus from Bernstein Private Wealth Management to share his insights on the Economic Outlook for the year 2022 economic.

In the beginning of 2022, financial markets were the same as in previous years: unstable. Troy started by pointing out that the latest uncertainty in financial markets is inflation, mainly due to the coronavirus and the current war between Russia and Ukraine. Markets remain the main driver of the outlook for economic policy and fiscal policy. He noted that the job market is strong right now because it benefits from workers leaving the sidelines and re-entering the job market. The reduction in covid cases and rising wages have encouraged people to become more active in the economy. If this trend continues, the impact will be positive, as the productive capacity of an economy is largely determined by the number of people who can work.

Federal Reserve Chairman Jerome Powell had previously pledged to raise the federal funds rate by 25 basis points. Their main goal is to reduce the inflation rate while also boosting employment and keeping prices stable post-pandemic. He argues that increased participation should increase wage pressures and reduce the likelihood of wages or prices spiraling over time by stimulating the supply side of the economy. Troy went on to say that the Fed will continue with this approach, rather than an aggressive monetary policy. The Fed recorded 678,000 jobs in February, while the December and January figures were revised up by 92,000 jobs. This means total employment was only about 2 million below pre-pandemic levels and around 3-4 million below where it would have been if the pandemic never happened.

Troy noted that the gains of employment were widespread across different industries and the number of workers not looking for work has just returned to pre-pandemic levels, and is adamant that this is clear evidence that improved public health plays an important role in boosting employment.

Troy's key message to all investors: 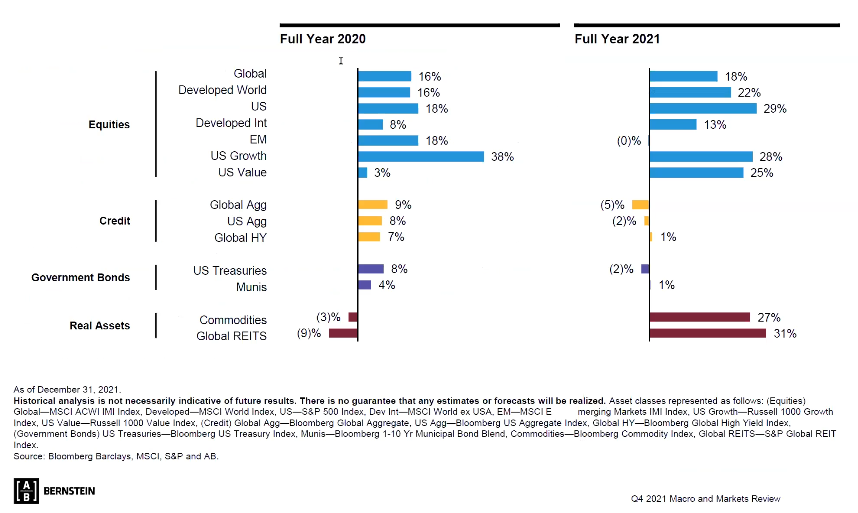 The chart above shows the numbers for 2020 and 2021. What is striking in the chart is that stocks in the U.S. returned 30% of equities at the end of last year and 18% globally. He agrees that geography may have played a role in this. While 2020 has delivered very strong returns, 2021 has been much more difficult for government bonds, each producing about 1% positive returns. Returning to his focus on inflation, he noted that the crisis in Ukraine and Russia in recent weeks has exacerbated the struggle. 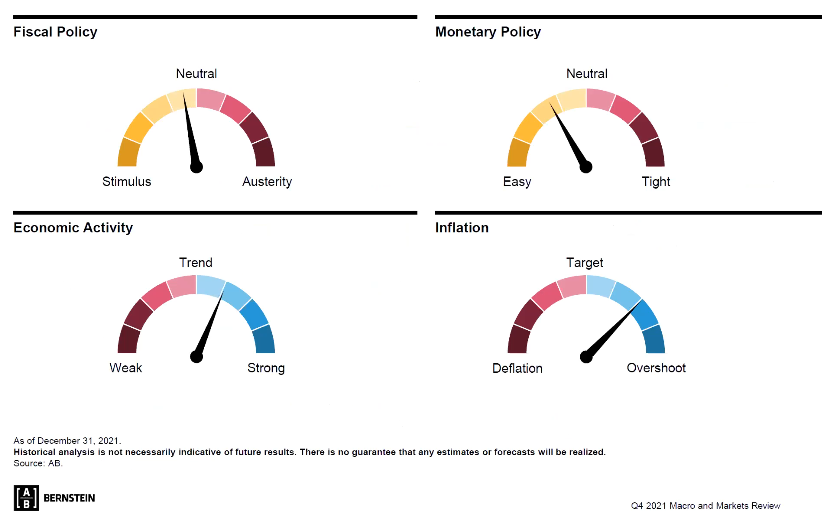 Fiscal policy: This has been an important topic of discussion during the pandemic thanks to the covid relief bills, rescue packages, and improved unemployment benefits, all aimed at efficiently reopening the economy. Looking ahead he said the fiscal policy would remain neutral and no stimulus package to stimulate the U.S. or any other economy is expected.

Monetary Policy: At the height of the crisis, the dial on the chart had been falling, but gradually began to rise. Troy expects it should continue to move higher throughout the year as interest rates rise.

Economic activity: Based on the above factors in economic activity, Troy agrees that economic activity will slow down the U.S. GDP forecast. While the current forecast is 3.4%, he sees that as still a very strong growth rate, double than normal, but significantly lower than last year's 6% U.S. GDP.

Inflation: Inflation is a hot topic right now, according to Troy, who will elaborate on the topic and the impact of the Ukraine-Russia crisis. 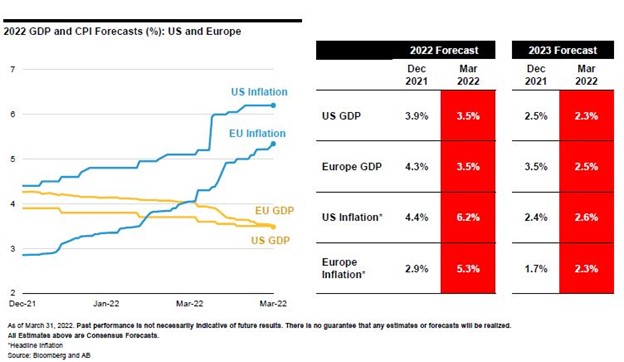 With the drastic changes to the Russian invasion of Ukraine since Troy’s presentation, some key economic and market forecasts have been updated above. Troy expects global growth to be above trend, but slower year-over-year, which is expected since the GDP cannot keep growing at a 6% pace. He also expects fewer accommodations to be offered, with respect to monetary and fiscal policy. The 10-yr Treasury Rate forecast has been revised to 2.75% for the end of the year. As for inflation, it can be more difficult to predict even for the Fed, which controls many triggers. Troy hopes it will slow down over time, but given the Ukraine-Russia crisis, he is not confident in his assumptions as it can be prolonged further. Last year the EPS grew to 45% last year, which was staggering, consensus expectations for the S&P 500 EPS from the street are largely unchanged and are 9% this year and 10% next year.

DIVING INTO THE IMPACT OF THE UKRAINE-RUSSIA CRISIS

Troy insists that before delving into inflation, we need to understand what could be affecting inflation, namely the current crisis between Ukraine and Russia. First and foremost, the human tragedy that this war has caused is unforgivable. Secondly, the long-term geopolitical consequences are unclear, but we may be entering a more vulnerable state than we have been in the past two to three decades. Financial markets have had mixed reactions to the crisis; some assets have shown sharp gains and/or losses, while others have been relatively muted across different markets. Unsurprisingly, he noted, the biggest changes have occurred in areas directly related to warfare.

Troy noted that despite the crisis, the decline was relatively orderly and there was no sign of widespread panic. When asked about the impact of war on markets, he explained that historically, wars have not had a major impact on financial markets, except on the psychology and actual lives of those affected. What investors are always trying to gauge at times like this is whether the conflict will have long-term economic effects, and often it won't, but he believes it will affect things in the short term.

Russia and Ukraine have small economies, with their combined sales accounting for only 2% of global GDP. Exports in these countries are relatively insignificant from most economies as investors worry about the aftermath of the war, as during this time financial conditions tighten, and economies and markets are adversely affected. He pointed out that the impact of the war on commodities is tangible, especially in the case of Russia and Ukraine. Russia is a huge oil and gas producer, they have about 12% of the world's oil and about 17% of the world's natural gas production. Currently, they are being shut off from the global stage, which is causing oil prices to rise. In commodities such as wheat, Russia exports 18% of the world's wheat and Ukraine exports 7%, meaning both countries are large exporters. Ukraine accounts for around 22% of the global corn exports. The potential for price movements in these commodities remains high, and therefore the risk of inflation is high.

He pointed out that if the conflict ends soon, commodity prices will fall before demand starts to be severely damaged. While it's hard to prevent this possibility, it's not impossible. There are many possibilities aside from any more worrisome economic conditions; he doesn’t recommend any meaningful adjustment to asset allocation. In the four days since the war began, the stock market has gained more than 1% in either direction. Three of them are positive and one is negative, so it's hard to predict possible outcomes, and it's a bad time to make a drastic move, which is why Troy sticks to his long-term strategy. 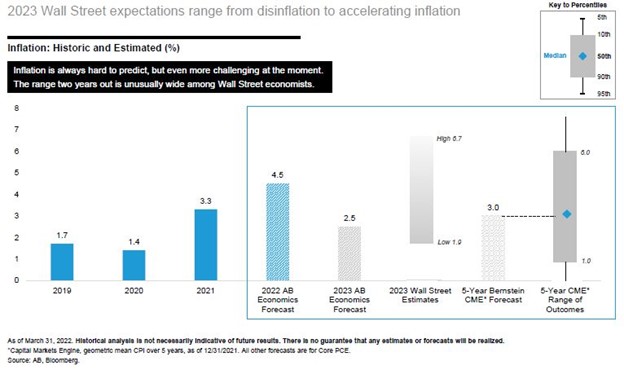 Troy has provided revised data above for the inflation forecast, which is now 4.5% for the end of 2022. Inflation and growth are now more likely to head in the wrong direction due to the Ukraine-Russia crisis. Inflation is likely to emerge in the short term, he believes, and the case for slower growth will take root. So, if inflation is higher, consumer commodities become more expensive, and consumers have much less money at their disposal as they did when the U.S. Government stimulus packages & relief bills during the covid crisis. 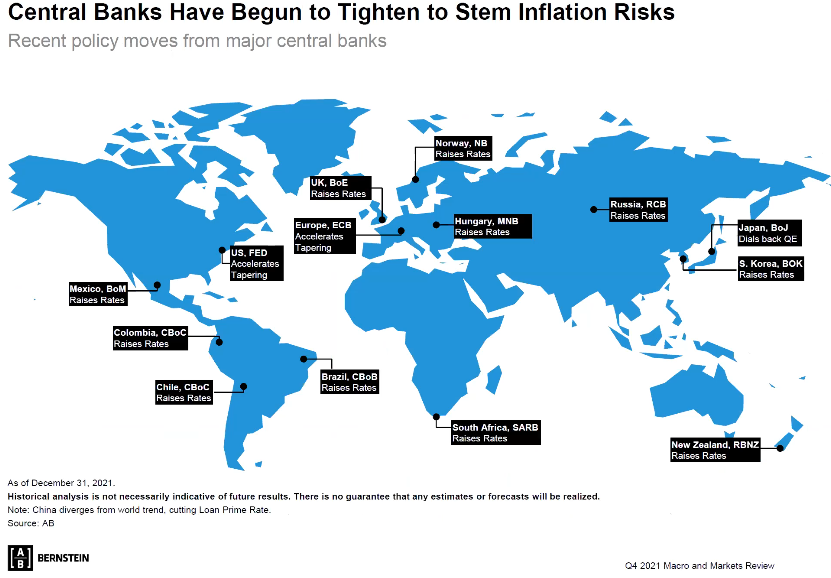 WHAT DOES IT MEAN FOR EQUITY RETURNS? 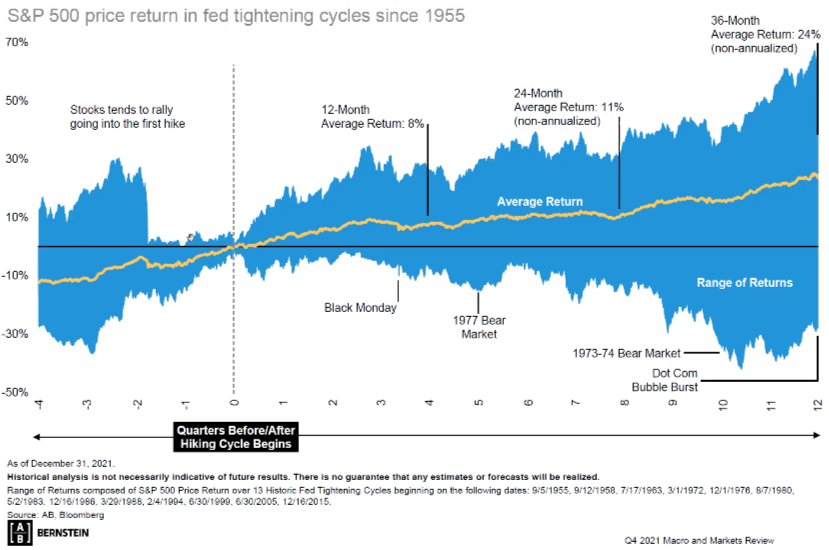 The 0 timeline in the graph above represents the quarter before hikes (left) after hikes (right)
and the dark lines appear every 12 months. Troy calculates the average return over a 36-month period.

Troy noted that stock returns are often thought to be adversely affected when interest rates rise, but that's not the case. Major events like Black Monday, the bear market, and the .com bubble caused some waves, but overall, the yellow line continued to move higher.

Can excess savings be spent or saved?

With all the stimulus payments, the issuance of access savings has been a tailwind for the economy. Slower spending could lead to slower growth in 2022 and could also ease some demand-driven inflationary pressures.

Will a change in S&P leadership bring volatility or opportunity?

Troy states that many are asking what will happen to the S&P. It's worth noting that in the U.S. 35% of the returns came from five companies (Apple, Microsoft, Alphabet, Tesla, and NVIDIA), which presents a really good opportunity for investors not only in the United States but especially globally.

In his closing remarks, Troy outlined key demographics and how they are dealing with inflation. 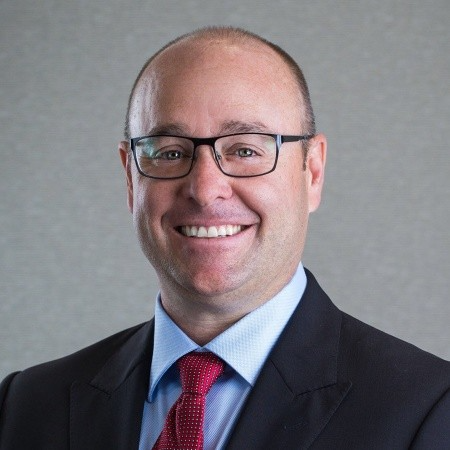 Troy Niehaus is the Vice President with Bernstein Private Wealth Management in the Seattle office. He advises high-net-worth individuals, families, entrepreneurs, foundations, and business owners on all aspects of wealth planning, including specialty investment allocations unique to the firm that solve very specific needs for our clients. Before joining Bernstein in 2017, Troy was a director at Intellectual Ventures, where he sourced and managed intellectual property investments and client relationships. Before that, he was a tech startup owner with nearly 20 years of experience leading engagements in the business world. Click here to watch his session.