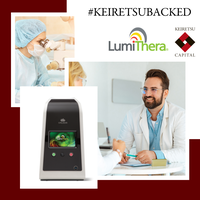 A total of 23 eyes from 15 subjects with Dry AMD were enrolled into the prospective clinical study and treated with PBM using the Valeda® Light Delivery System (3 times per week for 3 weeks). Eight Caucasian males and seven females were enrolled with a mean age of 75.1 years (65-93 years). The mean time since AMD diagnosis was 5.0 years (0-14 years). Subjects were tested for safety and functional vision improvements using the Diopsys electroretinogram (ERG) device. ERG is a diagnostic test that measures the electrical activity of the retina of the eye in response to a light stimulus. All subjects were tested at weekly intervals for ERG function prior to the start of the next week of PBM treatments. The study followed the patients out to 6 months. The study was conducted by Dan Montzka, M.D. and Larry Perich, D.O. at the Perich Eye Center (New Port Richey, Florida).

"The study further confirms previous LIGHTSITE I and II studies that the Valeda Light Delivery System improves visual function," stated Larry Perich, D.O. "The subjects were very pleased with the results of their treatments and no safety issues were seen."

Diopsys ERG testing is a powerful and quantitative diagnostic that can be coupled with LumiThera's PBM treatments to characterize early patient benefits on visual function," indicated Joe Fontanetta, CEO, Diopsys. "These results of this work will allow physicians to diagnose, treat and monitor patients and provides physicians a solution for a disease with limited treatment options."

"We are strong supporters of treating degenerative disease early to slow the progression of vision-threatening disease." stated Clark E. Tedford, Ph.D., President and CEO, LumiThera, Inc. "The key in chronic ocular disease is early diagnosis, treatment and monitoring and we hope studies such as this pilot pave the way to a more preventative approach. The patients in the ELECTROLIGHT study are similar in demographics as the LIGHTSITE III US study in terms of time from dry AMD diagnosis, AREDs use and age. Previously, we reported the US LIGHTSITE III dry AMD trial fully enrolled 100 subjects in 1Q of 2021 and is continuing to move forward with the 13-month efficacy timepoint for all patients in 1Q of 2022."

LumiThera is a commercial-stage medical device company focused on treating people affected by ocular damage and disease including dry age-related macular degeneration, a leading cause of blindness in adults over 65. The company is a leader in the use of PBM for treatment of visual disorders. The company is commercializing the office based Valeda Light Delivery System to be used by eye care specialists as medical treatments.

The Valeda Light Delivery System has been granted authorization to use the CE Mark by an EU Notified Body as required for commercial use in the European Union only. Valeda is not approved for use by the Food & Drug Administration (FDA) in the USA.