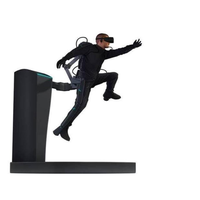 Today, HaptX, Virginia Tech, and the University of Florida won a $1.5 million National Science Foundation (NSF) grant to develop the first program to bring force feedback to upper and lower limbs in virtual environments, ForceBot. Founded in 2012 by Jake Rubin and Dr. Robert Crockett, HaptX started with a vision they strikingly captured in an image of the full body haptic system Rubin envisioned for virtual reality (VR). The company has taken a serious detour through reality, productizing haptic gloves for VR and robotic telepresence. After turning practical, and doing another round of funding based on its growing enterprise business, they are going back to the future with this announcement.

ForceBot is a four-year project to develop an exoskeleton for commercial and enterprise applications using HaptX’s microfluidic touch feedback technology to simulate virtual objects. The NSF grant will be distributed between each company to contribute individual components to ForceBot, and then the resulting IP will be used for commercial products. In the project, VR and robotics are hand in hand towards building a full-body haptic exoskeleton rig. The rig will increase force feedback on the human body for users in virtual environments. HaptX’s contribution to the project is finding the commercial uses for the rigs, in addition to the use of HaptX Gloves products in the rig. Jake Rubin, CEO and Founder of HaptX told us that in the short term they have always, “built towards the company’s original vision piece by piece, performing R&D on each segment of the full system while simultaneously narrowing down what has the most short term commercial potential.” The grant brings things into a full circle, with plans to use the exoskeleton to create prototypes of a product for the future. 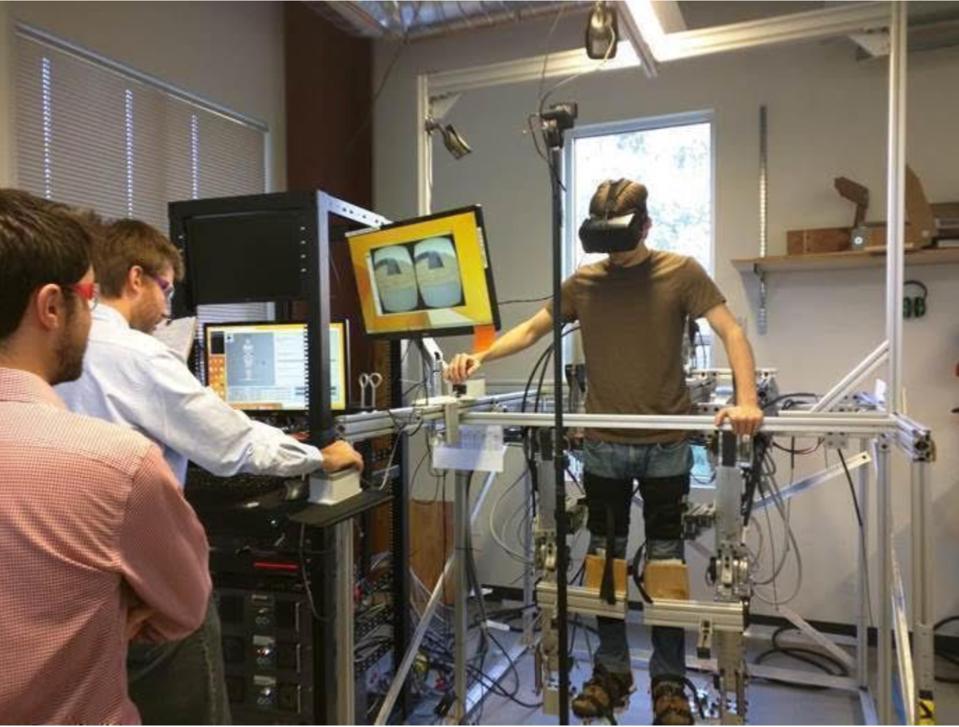 This exoskeleton will be designed to mimic real-world forces such as weight, texture of objects, shape, and terrain. Dr. Alexander Leonessa, Principal Investigator, Virginia Tech stated, “we’re excited to create a system that increases immersion for VR users in applications requiring intensive body motions like sports and industrial skills training, gaming, emergency response, and many others.”

How we interact with the virtual worlds we occupy is one of the central questions of VR. This thought regarding HaptX was included in my first book, Charlie Fink’s Metaverse. With the HaptX full exoskeleton, the rig will be able to use mechanical arms with gloves [as seen at CES 2020] and actuators attached to each leg will simulate the haptic feedback from walking, running, and climbing stairs. The company is trying to establish itself as more than a glove company. Regardless of the success of the ForceBot, the worst-case scenario is still a product that fulfills the company’s original vision in some capacity. Rubin left us with this statement, “immersion and fidelity are wanted in the market and HaptX is not going to stop until we get there.”

This story was written with Brandon Cloobeck.

Keiretsu Forum, the world’s leading angel investor network with over 1,500 investors in 38 chapters on 3 continents. Keiretsu Forum has invested more than $500 million into more than 700 companies since inception. Keiretsu Capital administers funds on behalf of its Limited Partners - the Co-Investment & Opportunities Fund creates a diversified portfolio of technology start-ups backed by top tier angel groups and pursues the high upside value potential in these dynamic investment opportunities while promoting the sharing of risk inherent in any early-stage venture.  The firm is based in Seattle and San Francisco and its principals are veteran Silicon Valley and technology investors Randy Williams, Matthew C. Le Merle, and Nathan McDonald.

For more information please visit www.keiretsuforum.com or contact us.